Italian masterworks in instrument building clearly don’t end with Stradivari, Amati, or Svandalli. This GEM Promega 3 from 2001 is living proof of that. It even stands out as somewhat of an exceptional instrument hundreds of years after the previously mentioned legends.

It’s not the sampled sounds—probably only considered average today—that make this Promega 3 so great. Instead, it’s its overall concept and the palpable intelligence and practicality that flow through what we’ll just call a digital piano. Four independently programmable sound sections, together with an additional section for external signals, are luxuriously divided across a total length of 88 keys. We should forgive the fact that the two wheels for pitch bending and modulation are at the top-left and not next to the keyboard. This prevents the instrument from being excessively long, meaning that the Promega 3 could still be carried even by people with average-length arms.

In Detail: Rotary Controller and Equalizer 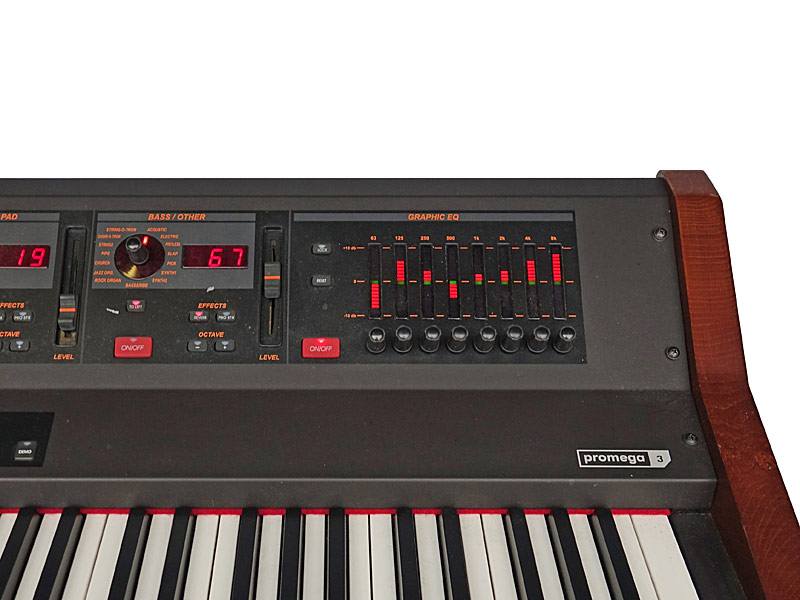 The motorized faders are real lookers, as well as the wreath of LEDs around the rotary controller. But the programmable 8-band master equalizer with its red LED bars even shows what’s happening on the darkest of stages.

Effects which can even be programmed independently per section and memory slot, as well as fully comprehensive MIDI specifications with a logical menu layout, round off this rarity which was unfortunately only sold in limited numbers. Keith Emerson is still more or less the only famous user of this Promega 3, which has an unbelievable 320 voices that can be accessed in sync.

That means there’s still 80 simultaneous notes divided across 4 sections, a feature which is also a high note. So why has this masterwork only ever had average sales success? Just like the Elka Synthex, this is likely due to prejudices against the manufacturer Generalmusic, whose organs had been more convincing through their sales numbers and not their charisma.

For nearly 20 years now, inclined masters on the keys have expected one of the big companies to take a closer look at this Gem Promega 3 in order to carry over its unique concept to their current product line. That would be music heaven for pianists, even without the Stradivari logo!